Who Is Jimmer “Mr. Buckets” Fredette?

His name still rings bells in certain basketball circles. Only the real ones understand the reign of who we like to call Jimmer “Mr. Buckets” Fredette. His time at BYU made him some sort of mythical figure. But Jimmer got his start in the great state of New York where he once wore the crown. Let’s shoot a three for this Hometown Athlete, and see what he’s done and doing.

Jimmer shot his way to the top.

Mr. Fredette has been balling since he could walk. He started shooting and hitting threes since the age of five. His father gave him the gift of paying against older competition early. Jimmer’s skills were sharpened, and it gave him an edge from an early age. Being born in the Glens Falls area, where New York State Champions go to be named champ. Jimmer was destined from birth to be great.

Rankings were nothing new for Fredette, coincidentally he was 75th in the nation. He also ranks as 16th all time among New York scorers with 2,404 career points. Jimmer was all state, and had 12 different 40 point games his senior year of high school. 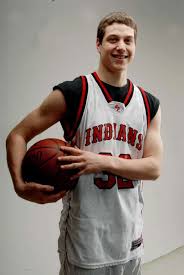 Jimmer’s father often took him to Hartford and New York City to compete against the stronger, more competitive competition which kept him hungry. Furthermore he went 25-2 his senior year, but lost in the state championship which hurt his prospects but didn’t destroy them. Though he went largely unnoticed by the big schools, he was still recruited by 12 colleges. He eventually chose BYU, Brigham Young University.

Jimmer got to college and showed the basketball world what they missed out on by not recruiting him higher. By his sophomore year Mr. Fredette averaged 16 points, 1.5 steals, and 4 assists a game making first team all conference. Junior year 2009 saw Jimmer elevating his game to another level.  It was against the Arizona Wildcats where he poured in 49 points. This set a record for the most points scored at the McKale Center. He would go on to break the cumulative Mountain West Conference tournament and single-game tournament records when he scored 45 points against TCU.

Jimmer helped secure his school’s first round victory in the NCAA Tournament against Florida. His 37 points was good enough to tie another BYU great named Danny Ainge. It was the school’s first time reaching the second round in 17 years. I think it’s safe to say Jimmer could have competed at any level, and at any school.

Fredette decided to skip the NBA draft and continue his education at BYU for his senior year. A choice that was considered crazy by many who dream of the NBA. in doing so he would set the college basketball world on fire as a senior. Fredette scored a season-high 47 points in BYU’s road victory over archrival Utah. It was a night to remember.  January 11, 2011, he scored 32 in the first half including a 40-foot buzzer-beater to end the half.

He was a seasoned vet and commanded double and triple teams the entire season. And somehow he still showed the world what he was made of. Let’s have a look at some of his numbers. He racked up 39 points against UNLV, 33 points in a rematch against Arizona, 26 against Vermont back home in Glens Falls, 43 points against San Diego State who was undefeated, 29 points against UNLV again, and 52 points against Mexico State during the conference tournament. 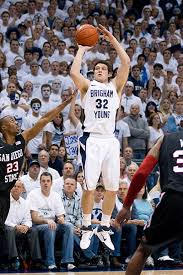 BYU would be ranked 3rd in the NCAA Tournament. Mr. Fredette scored 32 points while bouncing Wofford in the first round. But he wasn’t done there, he dropped 34 points against Gonzaga to advance his team to the Sweet Sixteen. The road would end there losing to Florida in a rematch from the year before.

Jimmer was named College Basketball Player of the year, and it was well deserved. He never let the doubters hold him back. Coincidentally he ended up showing the world why he was crowned king in high school, and again in college. He has too many records and accolades to type, but know it was all well deserved.

Jimmer would go on to be selected 10th overall by the Sacramento Kings in the 2011 NBA draft. His NBA career was filled with ups and downs, but Jimmer never gave up and always showed signs of greatness. Playing for teams like the Chicago Bulls, New Orleans Pelicans, and New York. Ultimately it was his time in China that saw him flourish as a pro. 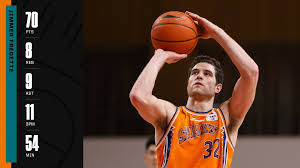 Fredette’s numbers didn’t disappoint while playing for the Shanghai Sharks.  Jimmer scored 51 points against Guangdong Southern Tigers. But not to be outdone by himself,. Jimmer would go on to score 73 points against  Zhejiang Guangsha Lions in double overtime. He was named CBA’s International Regular Season MVP of the 2016–17 season. Jimmer averaged 37 points, 8 rebounds, 4 assist, and 1 steal per game. Mr. Buckets was alive and well, and the CBA was his new home. He resigned with the Sharks and drop 75 points against Beikong Fly Dragons. By the end of the 2018–19 CBA season, he led the entire league in overall total points scored. Jimmer found a home, and we were happy he was playing his game again.

Giving is the Fredette way.

Mr. Fredette has always been someone who worked hard and helped others. This hasn’t changed in his life. Even with his success he remains humble and giving. His foundation helps train and develop kids in basketball and life. Fredette’s “Team Fredette Basketball” organization is helping to change lives for the better. Take time to have a look at what he’s up to at teamfredettebasketball.com

Shooters are going to Shoot.

The future is absolutely bright for Jimmer as the basketball Gods seem to still shine down on him. The CBA has been his home for several years now, and it seems to be a good fit for him.

Jimmer returned to China where he became the Shanghai Sharks all time 3-Point leader on December 29th, 2020. We want to thank Jimmer for blessing us with amazing games and work ethic. Take time to check out more on this Hometown Athlete by clicking his player profile. Let’s wish him luck and even more buckets in the future.

Who Is Michael “Hard Working” Rossetti
Scroll to top